You have no idea how hard it is for me to write this, to put this out there;
but I have to.
I just have to get it out- the story of you & I- into words.
And maybe, just maybe, if I finally piece it together on paper,
I’ll be able to let it go…

September: We are head over heels crazy for each other, like two teenagers in heat. Finding any excuse to see each other, running late to work just to make out in your truck. When we look at each other, it’s just there; it’s clear as day:
We Found It.

I stop by one night before meeting up with my girlfriend. We’re in my car, both sitting in the driver’s seat. I’m sitting on your lap simply because we need to be as physically close to each other as possible- we are drawn together by an effortless magnetism. We’re bullshitting as the newest CD I made plays in the background, when Track 7 comes on.

That enchanting, addicting, beat starts to chime in through the speakers, and she sings….

“Yellow diamonds in the light…”

You say how you love this song and I agree. We don’t sing along, we just listen. When the chorus comes on, you look at me and say, with a smile on your face, “Sounds about right.” I know exactly what you mean, but I pretend I don’t.

October: The overwhelming surge of an unbalanced mix of lust and love grows more and more with each day we spend together. We are so obviously and inappropriately infatuated with each other, and so uninhibited and unashamed about showing it.

I tell my best friend how for the first time in my life, I feel like I found someone that was meant for me to have; a love that was finally mine.

It’s Halloween. As I’m leaving your truck with one leg out the door, late for work (again) because we were too busy spending the day fucking and laughing and then fucking some more, you yell,  “Wait!” and grab my arm. You have a face crayon from your costume with you and you write on me, in black capital letters: MINE. It didn’t hit me until I walked into work why you did that; mimicking a scene from the song’s video.

November: We’re out in the city, drunk, as usual. I’m in all black and you have your shirt unbuttoned way too low. We’re surrounded by people but it’s only about us, in our own world of mayhem, mischief, and passion.

The song comes on and I get that “child-on-Christmas morning” smile on my face that you make fun of but secretly love, and I start singing to you. You lift me up; my tiny legs wrap around your torso and you carry me to the dance floor where we’re the only ones on it. I’m laughing in a state of blurry euphoria as you swing me around to our song and then you look me in my eyes and for the first time you say
“I think I’m falling in love with you.”

I reply, without hesitation, “I know I am.”

….what it takes to come alive….

December: It’s New Years Eve. We have to work, but at least we’re working together.
You text me “Meet me in front at 11:45.”

It’s hectic, loud, and everything seems to be flying by in front of me so fast; time, bottles, people. But were together, face to face, yelling “10, 9, 8…HAPPPY NEW YEAR!”

You instantly grab me by my waist, I naturally throw my legs around you, and the crowd freezes for the moment when you look into my eyes and you say so confidently “I love you.”

And then there it is, seconds after the ball drops, the first song to be played for the New Year, while our lips are still locked together. We give each other an unsurprised look, because at this point, it makes perfect sense.

In all my love affairs, out of all the many boys I have been boy-crazy over in my crazy life, I had never a better time than the time I had spent with you. We depicted the cliche clips directors would use to capture what “crazy in love” meant. I see the movie reel of our relationship, the moments caught, happening so fast, running around in the rain – carefree – neglecting responsibility & ignoring maturity. So wild, so enamored, so full of a teenage type of excitement that I felt like I was falling in love for the first time.

We would run around the city like there was no one we had to answer to. You would pick me up and I’d lock my legs around you and you’d carry me through the streets, our lips pressed up against each others walking like that without effort. It was our thing; it was us. You & I.

But there were also the quiet times when we weren’t acting so erratic, and being so perfectly insane together, when we would stay up talking for hours, laying side by side, being vulnerable and being real. You told me how different it was with me; more than anything you ever had before. You said you had never felt this close to anyone.

You also told me how much that scared you.

Part II: In a Hopeless Place

The details, dramatics and the indiscretions, they don’t matter in this story of you & I. Although, there was a shit load of all those things.
What matters here is that love happens.

You can’t revisit a relationship once it’s been burned to the ground. What happened between us became so messy that I fear it became irreparable. What’s left in the ashes is blame, shame, and embarrassment from a burned out flame.

It’s over a year later, and I have heard that song hundreds of times. But every time it comes on, wherever I am, whatever it is that I am doing, it hits me, dead in my heart, like I’m hearing it for the first time. 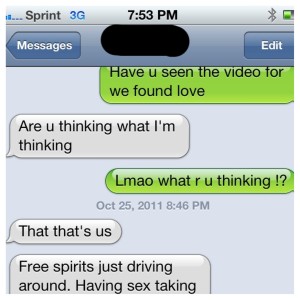