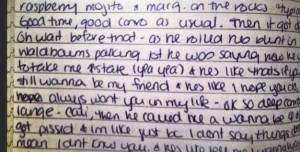 See, that’s the thing about love. And this is why relationships are so dangerous.

We get so excited when we meet someone we can actually get excited about. If you’re lucky enough to have had the stars align in your favor that one time out of a million, when the first time you make eye contact with some stranger and you just know you just want to know who they are, and it’s mutual, you feel like you just hit the cosmic lotto. When you first fall in love with someone, you feel like you cheated the rules of nature, you went against the odds and succeeded without even trying. It just happened. You didn’t even plan to go out that night. And here you are, 34 days later, just lying on the couch with some person who you never knew existed a month ago but can feel so comfortable with. Who has it better than you?

How many people do you just know? You know their names, where they live, who they go out with. A lot, I’m sure. In your lifetime, you are bound to “just know” a lot of people. And how many of them- despite how attractive or desirable they may be, despite how funny or perfectly nice they are- do you really think you can spend an endless amount of time with?

That’s why relationships are such a double-edged sword. Because you have decided that in all the billions of people you may “just know” in your lifetime, there is this one, this single, solitary one person from one town on one block in this big world who you think is better than the billions, whose just right for you. And you might be right.

But– and here’s the worst part- the interjection, the bursting of the bubble with the “but…” BUT, somehow, the alignment goes out of whack. Stars can only stay in place for so long. Just as each week that goes by, the moon changes, gets bigger and fuller only to get smaller again, the universe alters that beautiful array of gases that once caused you so much happiness and hope. And now you’re anxious and angry because the “how can he/she do that”, “why would she/he say that” start, all those frustrating feelings surface and you really just want to leave, you really just want to tell them to go fuck themselves and mean it, and never look back, never feel an ounce of nostalgia for that person ever again. And wake up the next morning, go out, and find someone new who replaces that person because they caused you too much pain for you to even want to remember them.

But (hi again)- you know that’s not how it works. And that’s the thing about love. That’s why relationships are so dangerous.

You know that you know so few people who you would want to lay down in your underwear with watching the crappiest reality shows and still want to be no where else, doing nothing more, than just that. They are the one person that when you see their name come up on your phone, you smile to yourself and let it ring a little longer just to watch. It’s feels like winning the cosmic lotto.

And so you stay. You put up with it. With all of it. You cant let it go, you cant be lonely again, you cant let that person back out into the world where they can sleep with whomever they choose or take to the spots you went to together. No, this person is mine, meant for me. The only one who can make me feel good, validated, normal, loved. It just has to work out.

We all know the “True love doesn’t die” quote. The different variations of it that we tell ourselves when we need something to believe that the months or years we put into a relationship, wanting so badly to believe that it will work, just as it did when you first met, weren’t a waste. You hear a song months after the relationships over, a song that was big when you were together, maybe a song you coined as “our song”, and you tell yourself that they’re listening to the same radio station and the same time and you feel better thinking that they are thinking of you, with a smile on their face just as you are. No matter how bad the break up was- the infidelity, the lies, the drama- that they don’t hate you. In fact, they still have a love for you. Or so, these are the things we tell ourselves.

“Promise me we’ll always be friends. I always want you to be in my life.”

I know he meant it then, when he said it, tipsy off of his typical margarita on the rocks. I know it wasn’t his basic bullshit. I know when he told me loved me, when he told me I was one of the coolest girls he knows & that he can never get tired of being with me, when we laughed in bed about our stupid fights, and when he swore he wanted things to be better, I know he meant it all, at the time. At the time when our stars were aligned.